Map to the Keep

People in the Lost Legion

The Lost Keep (referred to by Leo as Fort Noobery) is the main base of the Lost Legion. It is located deep underneath underneath Villagetown as it is safer than having it in the surface.

It is mostly carved out into the stone. The halls are made of stone and stone bricks, and stone variants such as andesite and diorite.

To access the keep, one must enter the mines of Villagetown and navigate the tunnels.

The gate holds building materials and a training yard encircled by a lava moat. There is a tree of some sort on the training yard and on the balcony. They have crafted a training golem made to resemble an "Owltroll". The Legion banner has been built on the floor out of andesite and diorite.

On the first floor, the keep is made to look rather homely, made out of andesite and stone brick and wool carpeting. Most of the action takes place on this floor.

This area has a dining hall, a storage, a food storage, a kitchen, a meeting room, a blacksmith room, a crafting/brewing room, and an enchanting room. 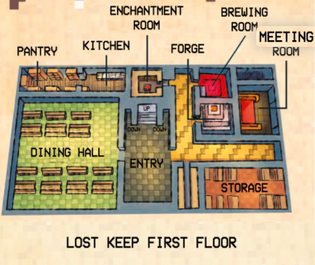 The bedrooms are located on the bottom floor. They're divided in two areas: the boys' hall and the girls' hall. The girls' hall has more space due to a decision on Kolb's part to compensate for them. This causes annoyance on the boys as they think it's unfair.

Due to the difficulty of building, the rooms are smaller, with Leo's room being just a bed.

It is unknown when the keep was first built, but it was sometime between after the Lost Legion arrived and when Eeebs was moved into it.

When Villagetown was attacked, it was turned into a bunker which was guarded by Ophelia's team.

All Legionaires live in the keep. This includes:

Community content is available under CC-BY-SA unless otherwise noted.
Advertisement